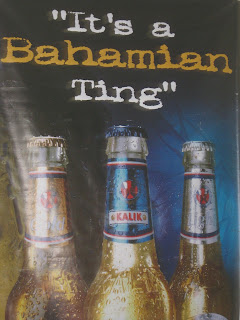 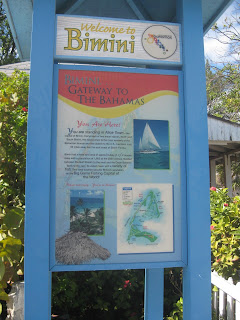 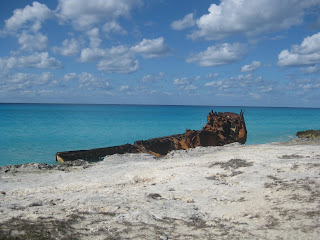 Here again for the sparkling, pristine waters and the cool island life.
Posted by SCS at 11:27 AM 1 comment:

With some health issues having developed, we have decided to sell Jus' Now and revise our sailing plans.  If interested, please consult a detailed description of our 1999 Perry 43 Catamaran at the links below.  Located in Marina Carenero in Bocas del Toro, Panama, she is a beautiful boat and has taken us throughout the Eastern Carribean, the Western Carribean, the Bahamas and the Intracoastal Waterway.  Our memories of this four-year journey will not be forgotten.  We now hope that someone else will soon be able to enjoy the kind of cruising we have done with this great catamaran. 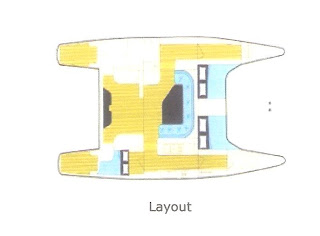 November 13, 2009--Change,nothing is constant but change

We decided to use another site for our blog. Check it out at http://www.travelpod.com/travel-blog/jusnow/1/tpod.html. Although it's, as always, a work in progress, you can see an ongoing map of our trip in addition to the usual.
Posted by SCS at 2:19 PM 1 comment:

A Quiet Hurricane Season Comes to an End

The hurricane season is almost over so we'll be leaving Brunswick in a week or so. We'll miss the beautiful live oaks (above) many dripping Spanish moss from their branches. The sea oats
(above) are another beautiful site here.
We plan to head south to Marathon for Thanksgiving. Our daughter Brooke will join us there for the holiday much to o
ur delight. Then our friend Steve Olson will join us to cross from Key West to Cancun and points south. We're delighted about that as well.
Brunswick has been a pleasant pause in our travels. It has been great to be stateside enjoying the ease of shopping in well-stocked grocery stores--of course, I mean stocked with the foods I'm looking for. We also have our car here with us, so we're not walking mile upon mile laden with heavy bags of foodstuffs and other goods in often hot, sunny weather.
The first month here in Brunswick was beastly though and with no car then, we trekked several miles to doctors' appointments and grocery stores--and of course West Marine. On July 28th we left for a month-long visit to Bordeaux, France, beating another beastly hot month here in Brunswick. A little more on France in the next post.
While here, we visited my mother in Maryland, pictured here with my brother Carter and me
and with his wife Cindy, below.

I also visited one of my childhood friends, Joan Higbee, and her mother pictured below.

We were fortunate to have visits from another of my childhood friends, Debbie Cofield Forrest and her husband, Bob--an Army buddy of Mike's. Debbie and Bob now live in Luray, Virginia, in the beautiful Shenandoah Valley.
And our dear friend and neighbor Rosemary Kernahan whom we knew in Denver, drove from Atlanta to spend a long weekend with us.
Posted by SCS at 4:01 PM No comments:

We have been in Brunswick, Georgia, since July 2. It's a cute town with a small historic downtown area close to the marina. Unfortunately, without a car, it is hard to get around. We do tremendous amounts of walking which, though good for us, can be brutal in the hot, Georgia sun.
After one week here, we took off to visit my mother in Maryland--700 miles north. Quite a long trip for a brief visit, but worth it. We spent July 12 at the Delta parade at my brother's house with 78 of his closest friends and a great guitarist and singer, Dennis(?)
Arriving back in Georgia, we decided we should go on to our condo in Punta Gorda, Florida. There we spent a week getting things in order for visitors from France. Pat and Marc Papon of Bodeaux, France, and their sons, will be spending almost a month at our place while we spend a month at theirs in Bordeaux. We're pretty excited about it and thank Intervac.org for providing the basic information that allows people like us to make a match.
We leave for France tomorrow. Our boat will stay here in Brunswick at the Brunswick Landing Marina--safe and sound for the hurricane season. Au revoir.
Posted by SCS at 7:50 PM No comments:

Got into St. Augustine late afternoon on Thursday, June 18, outrunning a nasty-looking storm west of us. We are hoping to haul the boat on Monday at the only place between here and Brunswick, Georgia, where we'll be for the hurricane season, that can haul our 22-foot-wide boat. Meanwhile we are enjoying St. Augustine. 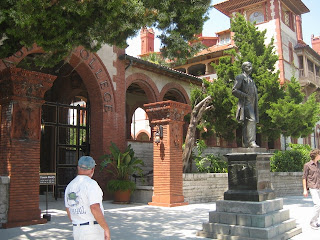 In the late 1800s, St. Augustine became a vacation spot for the very wealthy. Henry Morrison Flagler set out to develop the east coast of Florida with the goal of exceeding expectations of the wealthiest American tourists. Flagler College now occupies some of the elegant buildings and has undertaken the restoration of them.
St. Augustine is a tourist mecca identifying itself as the oldest city in Florida settled by the Spanish in 1565.
The pirate ship below gives daily tours around the harbor entertaining its guests with lots of pirate drama. 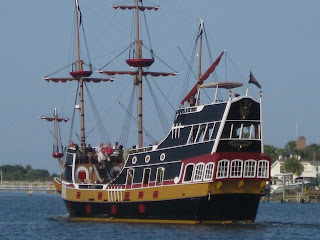 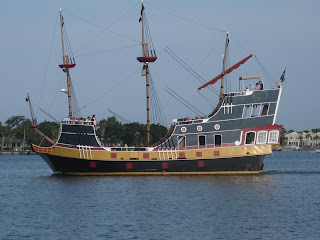 Another attraction is the sailing ship, Freedom, which caters to the tourist crowd looking for a sailing experience.
We lucked out on our way there when Mike caught a King Mackerel which we later had in the form of ceviche as well as grilled for dinner. 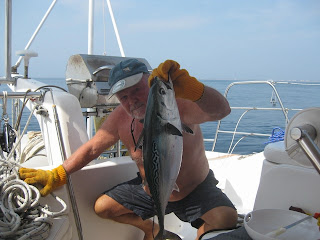 Just a brief update--we are moving up the coast of Florida. Spent several days in Fort Lauderdale, then a week in Lake Worth; then on to Stuart. Yesterday we left Stuart, sailing overnight to New Smyrna Beach, just south of Daytona Beach. We were poised for a possible shuttle launch as we passed Cape Canaveral. However, at 3:30 a.m., the Coast Guard announced that the shuttle launching had been scrubbed. We were so disappointed as we had an excellent vantage point in the Atlantic Ocean just east of the Space Center.
Tomorrow morning we leave for St. Augustine.
Posted by Sue and Mike Stover at 4:43 PM No comments: 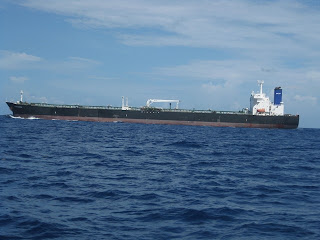 Well, we made landfall--USA--on Thursday, June 4, at about 4 p.m. Lake Sylvia, Fort Lauderdale, was the locale. Thrilled to have decided to keep on going once we reached Gun Cay in the Bahamas. We had sailed all night from Frazer's Hog Cay in the Berrys--a beautiful night sail. Made the decision around 6 a.m. and went for it. Bad weather was predicted for Friday so we were glad to tuck in on Thursday afternoon. And in fact there were some bad thunderstorms on Friday that we were glad to have missed. The only bad thing was that we had to motorsail the entire way. Made good time, but we hate to miss a sailing opportunity. Saw several freighters like this as we made our crossing.
Left this morning for Lake Worth. Anchored here about an hour ago. Having lots of trouble with power so we're all set to take our Xantrex in to the dealer tomorrow. OH, well, ....Could have happened in the Bahamas or elsewhere. At least, we're in the vicinity of a dealer.
The palm trees surrounding the homes in Lake Worth were beautiful. 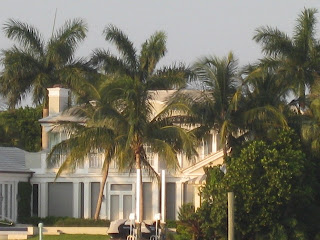 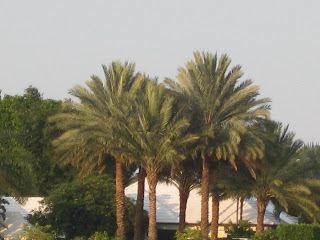 
Having recovered from a touch of the crud in Luperon, by Tuesday Mike was ready to go as the weather window was slim to move on. The winds were a bit more than we expected, 20 to 25 knots, and the seas as well--6-8 feet with a 6 second interval. Very lumpy and right on the beam, which made for a very rolly passage! Got into Provo, Turks and Caicos, at noon on May 13, about 24 hours after leaving Luperon.
Traveling across the Caicos banks, an approximate 10-mile stretch, proved a little hairy as we were hoping for good light to watch for the occasional coral heads in the very shallow water. However, it was a partly sunny day with fast moving clouds which caused us to work very hard in searching our way.
We were very happy to reach Sapodilla Bay where there were about 8 other boats, all of which had sailed from the Bahamas together. They were a very friendly bunch with whom we joined at one of the upscale bars Wednesday afternoon after clearing in with the friendly Provo officials.
Thursday evening, the marina manager and owner from a nearby marina, South Side, held a barbecue for the cruisers in the marina as well as those of us in Sapodilla Bay. They came for us and brought us back as well. While there, we met some several cruisers from the Colorado area: Mark & Karen from s/v Susurra
had lived on Lafayette Street in Washington Park;
Jack & Marianne (a former finance professor at UCD) were from Evergreen; and Casey & Luralea were from Ouray. Small world.
Then Friday we joined ten other boaters in Sapodilla Bay renting a van to run errands, tour the island and eat lunch. It was a very fun day ending with a happy hour at a Turtle Cove bar and live music.
Another first while there was a "girls' day out." With the weather threatening storms and high winds, all of us stayed at anchor much longer then anticipated, so we decided to go to the pool at Neptunes, the only nearby, but very nice, restaurant. It has a lovely pool area and they welcomed us with open arms. It was a fun and different day. 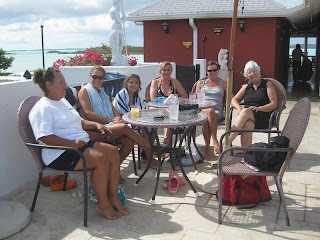 When we returned, the guys had gotten together on s/v Lala to help Henryk cook then eat his famous latkes--which of course the girls enjoyed as well when we returned. Henryk and Mariola along with their two children, Rick and Lala, on s/v Lala are from Poland and British Columbia. Lala, age 10, is loving their sailing adventure and gets along famously with all of the adults. 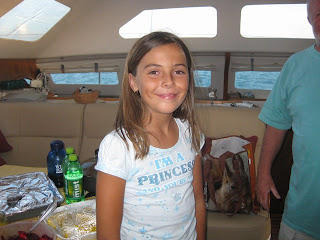 Rick has buddied up with one of the single-handers and since they are traveling as a group some of the time, assists Marc sailing Opal.
The weather, though getting better, is still very windy with higher, confused seas because of a tropical wave. So we continue to wait for some improvement which is due around Tuesday to continue our journey.
Posted by SCS at 3:17 PM No comments:

I'd like to share my Snapfish photos with you. Once you have checked out my photos you can order prints and upload your own photos to share.